In old Roller Derby parlance, “tickets” meant something else entirely different.   Of course you needed a ticket to get in to the event, but to the women of Roller Derby it was a word they used to talk about their breasts.

Ann Calvello used to yell at me from the track that her tickets which were so perfect after she was off between seasons had shrunk when  she was back in shape and skating, and somehow it was my fault.  It was understood between the players that when blocking you avoided the tickets, and the biggest arguments in the dressing room were about accusations that someone had purposely violated this unwritten agreement.

I don’t think we exploited the sexuality of women very much in the sixties and seventies as it would have been demeaning……it was required that when they had on jerseys with a zipper in front that they didn’t expose cleavage; of course Calvello did.  When we did glamor photos for promotion, the players didn’t wear their tights but only their shorts to show they did have legs.

Once Freddy Cohen, our aged advance man, brought a dancer from a topless club in San Francisco whose name was “Topless Twiggy” (catchy, huh?) for a photo shoot.  Joan Weston was on the track for her session when Twiggy, sans jersey, skated on the track…..she definitely was not Twiggy when topless.  Joan was not happy; she was a good catholic girl who never swore and was embarrassed.   Joan left as soon as she could.  The photographer took a few photos of Twiggy skating towards him, and as we were having a major road trip to the Midwest and East and knew the nature of sports editors at that time, sent out a photo with our press release.  The caption on the photo was “this is Topless Twiggy, she is not a skater and will not be on hand when the Bay Bombers meet the Midwest Pioneers on October 16 in Sioux City, etc”.   Amazingly, most editors printed our full press release in their papers, and of course posted the photo on their boards.  I think this would be unimaginable now.   There, I have confessed my indiscretion.

So is this just about breasts?  Of course not.  Many people do not understand the nature of the skaters in today’s Roller Derby.  In the 1480 leagues in 41  countries, with some 100,000 women participating, there is a full body contact sport which requires great conditioning and training and sacrifice.  The leagues are amateur, non profit, and the players give hours of their time and have to pay a monthly fee to belong.  Community service and support of charities are mandated.  Roller Derby becomes the resource.

They are not skating to excite the men watching (always a few exceptions) but these are serious, dedicated athletes who are playing a tough game, yet still have great feelings for all the players they are competing against (“derby love”).  And the fact that some are tattooed and they have strange nom de plumes should not deter you from understanding that the audience is hip and families attend without fear of excess violence or danger.  And many leagues now have junior programs where some women even have their daughters learning to skate.

So get any strange ideas out of your head that they are skating for your sexual excitement and notice that over half the audience is women,  and up to 7000 people are attending their games (“bouts”) and enjoy yourself and keep your raincoat buttoned. 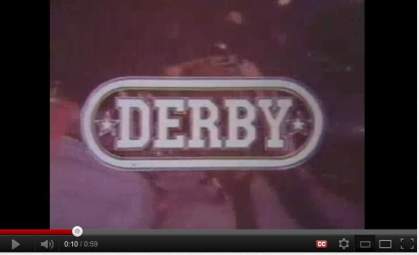